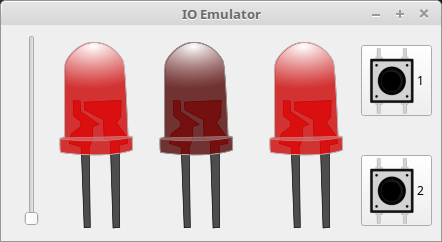 The ioemu-project provides an emulator for input/output operations with simple electronic components like LEDs and push buttons.

Use pip for a simple installation. For an update use install --upgrade.

First start the emulator by entering ioemu on the commandline. A Gui will show up.

It contains a slider for analog values between 0 and 99, threee LEDs and two push buttons from left to right.

If the emulator is running, you can interact with it from any python program running on the same machine. First import the class Emulator from the ioemu package.

Now create an instance of the emulator and switch some LEDs on. They can be controlled by setting the leds attribute.

The emulator has two buttons. Their current state (pressed or not pressed) can be read from the attribute buttons. It’s a bool array corresponding to the state of being pressed.

The following program lights up some LEDs depending on the button being pressed.

Let’s look into a program that allows you to control the LEDs with the slider at the left. The current sliders value can be read from the analog_value attribute of the Emulator. Its value ranges from 0 to 99.

There is a demo program that can be started with python -m ioemu.demo. It will blink the LEDs and print the current button state as well as the analog value to console.

You can find the source code in demo.py.

If you find any bugs or have a feature request, feel free to file a ticket at the projects bugtracker on github.